Participated in the Technion program for Excellence: 2008-2013.

Guy joined the Technion program for excellence after a long military service and studied Electrical Engineering and Physics.

He conducted two research projects in the field of Memristors which are recently discovered basic electric elements (like resistor, capacitor and inductor). Memristors can be used as passive memory cells with many benefits compared to today’s computer memories, they can also be used to extend (and maybe later even replace) nowadays CMOS technology as logic units.
The goal of one project was to investigate and suggest different methods to use Memristors as logic elements. This work was part of two journal papers, one conference paper and a patent. The project was awarded the 2012 “Oz Mozes award”.
The second project implemented a multithreaded CPU with a new architecture based on the possibility to use large and fast on-chip memory (which might be implemented as Memristors). Finally the tradeoffs and performance benefits of the suggested architecture were analyzed.

During the summer of 2012 he was a visiting student in the Camera Culture group at MIT Media Lab. During the internship he worked mainly on glasses-free displays – a method to use a standard display which people who usually wear glasses can view without the need of their glasses.

Today (2018): Guy Satat is a PhD student in the Camera Culture group at the Massachusetts Institute of Technology (MIT) Media Lab. He is passionate about developing imaging technologies that solve great challenges in society, science, and health. More specifically, he is developing imaging solutions for seeing through obstructions using time-resolved imaging and compressive imaging. Link to website.

Recommendation to program participants: “Try to engage in research as soon as possible, although it might be hard with class work it is extremely important (research is very different from classes, and is more challenging). As part of the program you have the option to take fundamental classes in different fields, this is a good way to build a strong background and later navigate to more advance and graduate level classes”. 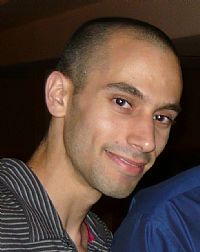