During high-school, I participated in “Archimedes project”, in the faculty of chemistry at the Technion, which is a program intended for high-school students, in which undergraduate courses (mainly in chemistry) are given. I consider it my first exposure to science.

Later on, I took part in two international chemistry competitions, held in South Korea and Russia, and even won a medal once.

In the army, I served in a technological unit, which showed me the more practical sides of science, mostly computers and electrical engineering. During my service, I also read books on physics and mathematics, which revealed a whole new world to me.

The result was a “positive” confusion as to what I was going to study; a confusion which I believe the program can handle quite easily. Currently, I study a double degree in physics and computer science, but I hope that with the help of the program, other aspects of science won’t be neglected.

BTW, I wrote “about myself” only in relation to studies. Of course, this is only one aspect of me.

I think that this is the only relevant aspect of me here, in addition to the comment about my many more aspects 🙂

What year did you start the program: winter 2011

What are you studying: Physics & Computer Science 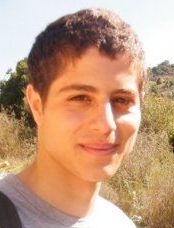